THE “QUEEN” OF DECORATING

Previous Next
THE “QUEEN” OF DECORATING

As a guy, in what most assume is a predominately female industry, it’s easy to find oneself competing against certain stereotypes.  Fortunately, creativity isn’t limited to a single gender, anymore than every element of interior design is fundamentally “girly”.

Recently, I’ve had the pleasure of working with a great family in Wauconda, IL to help pull together a brand new look in their Family Room.  During their initial consultation, it was obvious these DIYers had already been hard at work.  Customizing their primary living space, they’d already added a new, stacked-stone fireplace & mantel, built-in cabinetry and recessed lighting in the ceiling. 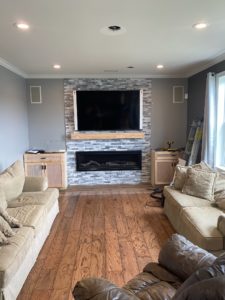 As I got to know them and their vision for the space, I made several additional “structural” suggestions including floating shelves on either side of the stacked stone to balance the fireplace and give us a place for “things”.  I also suggested repainting the room, moving the dark, accent color from the window to the fireplace wall to help unify the focal point and accentuate the stone & shelving.   I recommended black quartz for the cabinet tops as well as painting the cabinetry and mantel white to coordinate with the black tv and fireplace surround.  Finally, to showcase their hard work, the homeowners wanted to replace all the furniture in the long, narrow space as well, keeping in mind it needed to be family and pet friendly.

After bouncing around a few ideas and creating a space plan to maximize seating, we decided on a new sectional sofa and console table, pair of swivel, club chairs and table, a leather ottoman as well as a new area rug, window treatments, lighting, botanicals, artwork and a few, new accessories. 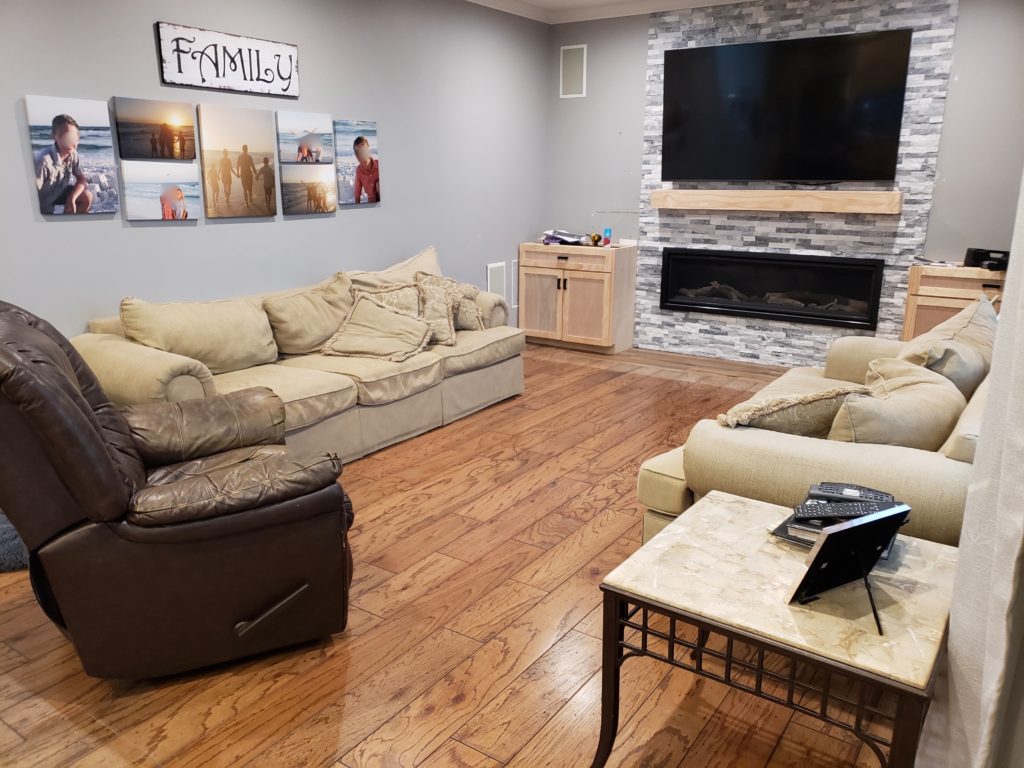 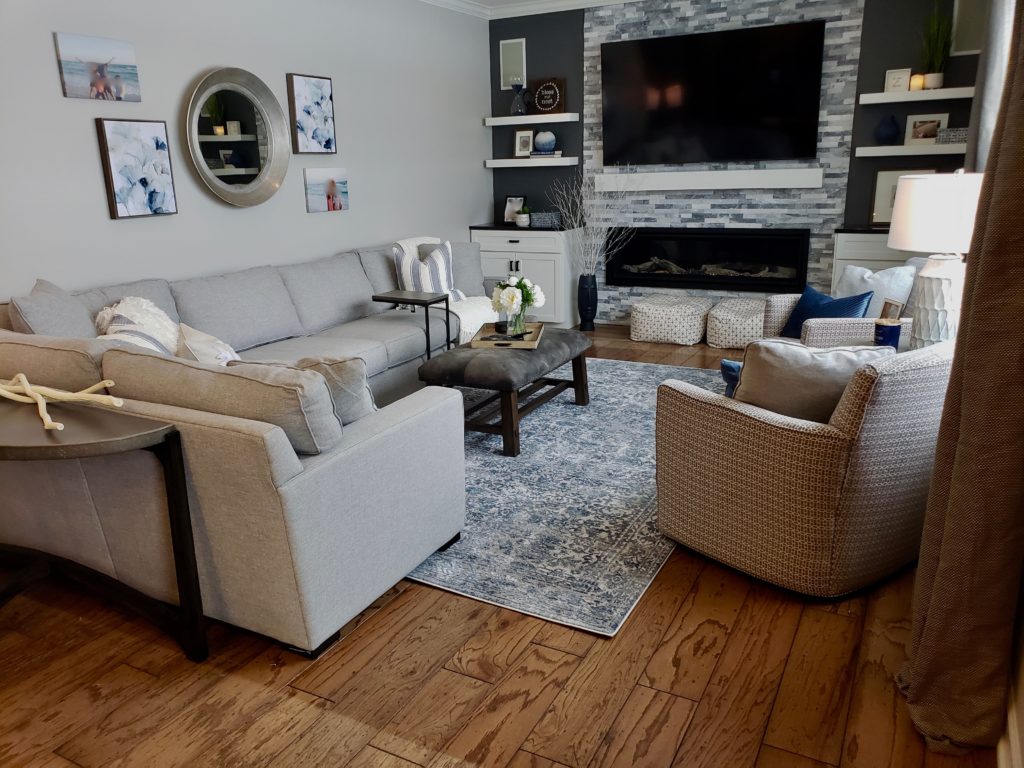 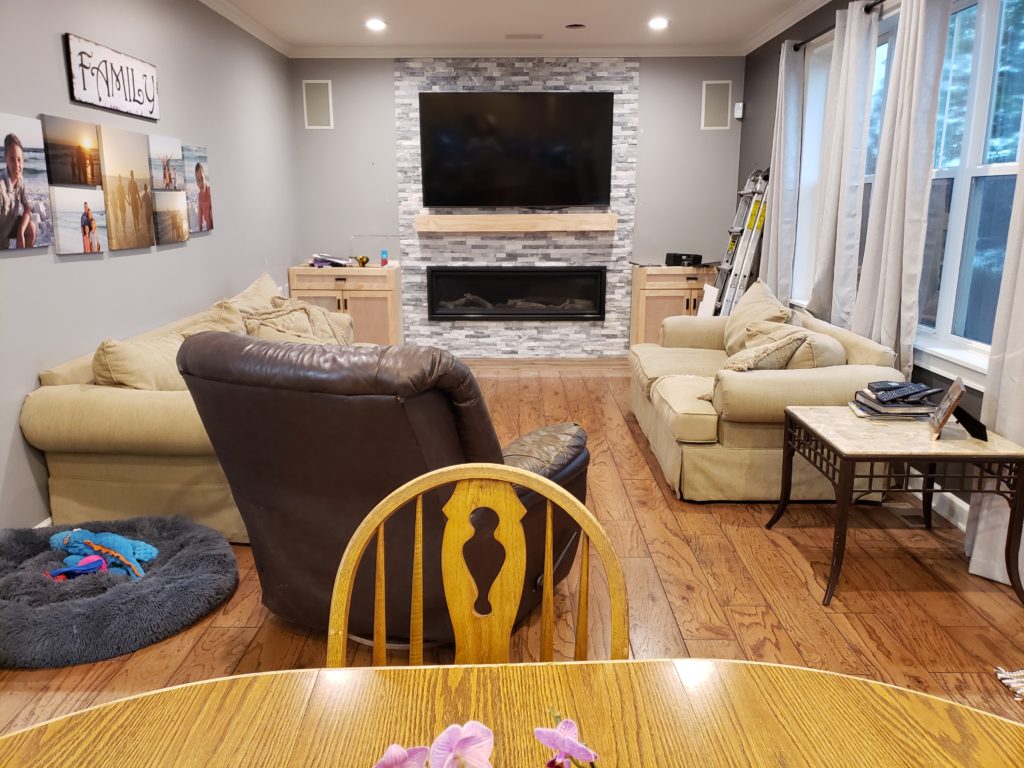 Once all the furniture had been delivered, and we’d found every little detail we needed, I spent a few hours styling the space & layering in everything that gives a room personality and brings it to life.  With tonal, greige neutrals and pops of warm white & blue, the end result is family (and family dog) approved. 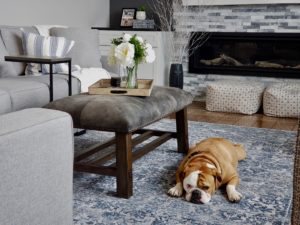 While cleaning up, we were chatting about how nice everything looked and how we looked forward to working together on future projects.  As I gathered my tools getting ready to leave, one of the owners added, “You’re the Queen”.  Caught slightly off guard, but without thinking much about it, I replied, “Well, wouldn’t be the first time I’ve been called that!”  We all died laughing when I realized she was talking about the dog, lounging like royalty on the nearby recliner, not me. 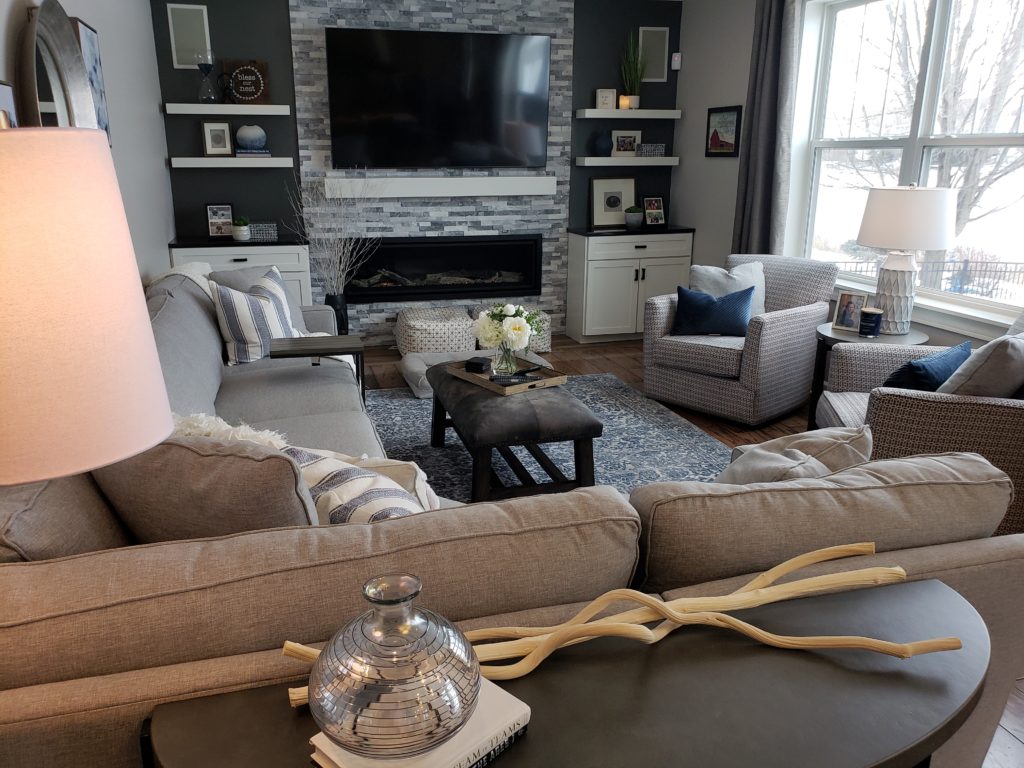 As I said before, stereotypes exist for a reason.  The family pet might have been the “Queen” in this particular instance.  But, if being called “the Queen” of decorating is the worst I’m ever called, I’ll take it!

In life, a good sense of humor is just as important as good decorating.  Here’s to the best of both whether for a dog, a queen or anyone in between.  Happy Regal Decorating from Decor Designs, Inc.  815-245-2433