INSIDE THE BOX DECORATING

Previous Next
INSIDE THE BOX DECORATING

Thinking “outside the box” is a trademark move for creative people including interior decorators and designers. For me, it’s kind of a game to see how many “I’d never have thought of that” comments I get from my choices when pulling together a space.

One of my recent “out of the box” ideas actually was more inside the box for lack of a better way to describe it. My client had purchased two sets of matching art. Two were identical oil on canvas succulents in blues & creams. The others were framed paper-cut owls. She loved both but was having a difficult time deciding which she liked better and where they should go. 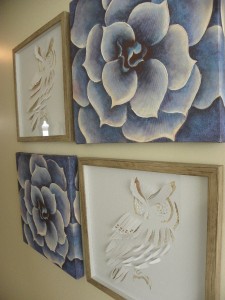 After careful consideration, and since the pieces were roughly the same size, I decided to group all four creating the illusion of one giant box (or piece of art).

The resulting focal point offers variety, texture, flow, and visual interest and makes a much larger statement than the 4 smaller, less impressive pieces of art could’ve done alone. “I never would have thought to group them like that!” was music to my ears!

Always remember that smaller pieces of art, accessories or collections always make a more powerful statement when grouped together.

Next time you need an out of the box idea, try thinking “inside the box”!