There’s a common problem with renovations or redecorating that take time to complete, maybe even years. Time and budget constraints prevent you from doing everything at once. We’ve all been there! So, you finish a project, move on to the next and the next and just when you think you’re finally done, you look around to realize the first bits need doing again. Maybe those first projects now look tired and dated compared to what you just finished or simply your taste has changed over time.

That’s sorta what had happened in this beautiful, older home in Highland Park, IL. Its family has shown it a lot of love over the last dozen years or so. They’ve added on, updated kitchens and baths and decorated along the way but still felt like it needed those “finishing” touches to give it the updated look they’d wanted from the start.
After spending a couple hours with the family, we formulated a budget and plan of attack for updating a few things, eliminating excess and adding those finishing touches.

We began with paint in the Living Room. The Tuscan faux finish dated and darkened the space and clashed with the custom window scarves. We neutralized it by picking a complimentary color to the adjoining family room which connected the two spaces and made them feel larger. The custom window treatments also got a revisit. The style was dated but the fabric still had usefulness. So, we had them altered into 95″ grommet top panels and raised them to add height and drama to the room. A mismatched sofa was donated to charity making room for two new occasional chairs. New end tables and lamps were added to compliment the existing storage trunk ottoman. New artwork and a few new accessories finished the look. 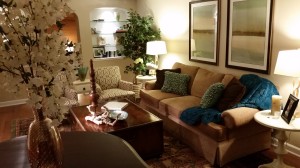 At the end of a very long day pulling it all together, the family started arriving home. Everything met with rave reviews because it finally felt done! And you know you’ve got something right when a 9 year old son gets excited about decorating! Before bed that night, he told his mom, “Our house looks like it’s worth a MILLION dollars!!!”

Sometimes all it takes is a fresh perspective on a project that has become too big or too long to see with new enthusiasm. If so, why not give redesign a try? Happy Decorating!